I recently finished my crazy quilt project Crazy for Crazy, and now want to write its story. 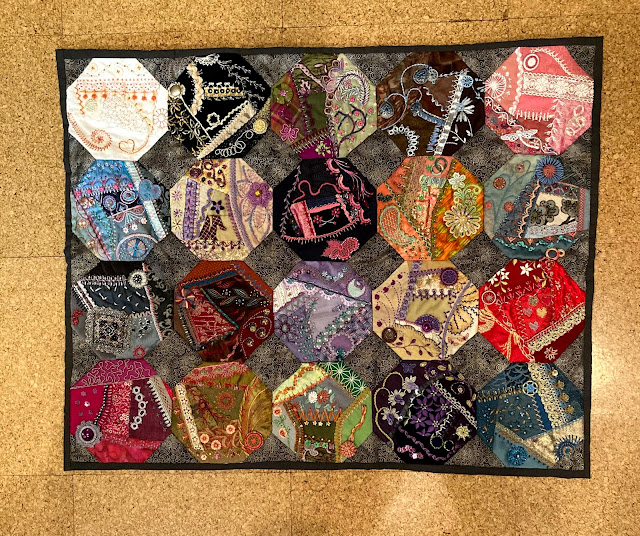 The fifth block I made is in Black and Tan, the second block from the left at the top of the quilt. 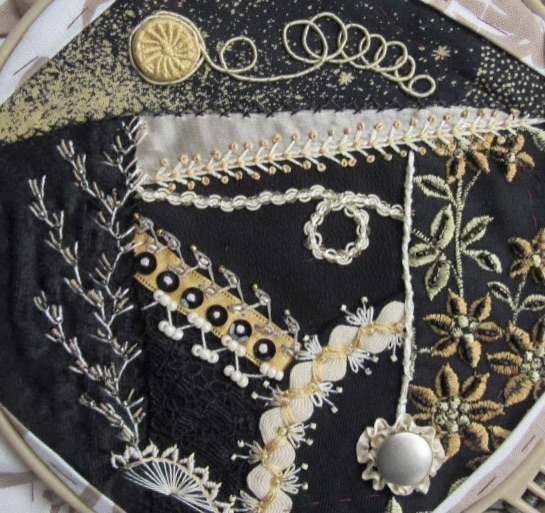 I jokingly called it the Guinness block, because it reminded me of the colours of a pint of that dark Irish stout and its creamy foam. It also looks like a glass of Irish Coffee (black coffee, topped with cream (and spiked with Irish whiskey)).
My first encounter with stout was not in Ireland, though. A Swedish brewery ran these advertisements for porter from D. Carnegie & Co, and they all featured sepia portraits like this: 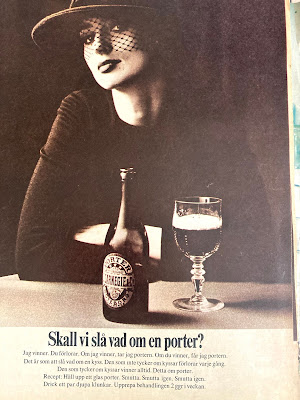 Long before I was allowed to drink, I drank in the image of the pictures.
Other memories of Black and Tan: A pair of ballerina shoes in tan with black patent toes.
Also for my very first salary (high school summer job) I was able to acquire a black and tan plastic point card at a major department store, and felt so grown up with this member card. I had become a member of the Adult World, I bought things with money I had earned.
The fabric holds memories, too. There is
This dress was a birthday present my husband gave me when we were still courting. It was bough in a shop in London and I fell in love with it at first sight, there on the mannequin in the shop window.
The dress was sleeveless and had a jacket made up four triangles, stitched into two 'butterfly' wings. The jacket therefore had a slit all up the back which made it easy to move in.
The best was not the design, though, but the print. On a black background there was the Universe, with Saturn and the other planets, the Milky Way with all the stars. The dots that can be seen on the patch I used are those stars.
Eventually the dress became so threadbare and patched it was beyond further repair. The last time I wore it was on our 40th wedding anniversary. Now all that remains are some treasured scraps of fabric to use for future projects.
Sharon Boggon and Mary Corbet's design ideas were used to decorate the ric-rac with embroidery (SB) and stitch a combination of Wheat Ear Stitch, Back Stitch and French Knots (MC).
Another ric-rac with gold in it was bought at Tokyo Dome's quilt show. There is a Dorset Button, and half a Buttonhole Wheel with Buttonholed Fly Stitch. A button in brushed metal sits on a cloud of ruched ribbon = the creamy foam of Guinness?
I had once bought gimp in the UK, not knowing what it really is (stabiliser for buttonholes in tailored clothes and so on). In my naivety I thought I could stitch with it if the needle was thick enough. Ha! I soon realised my mistake. However, it can be couched down!  So I wound the gimp round a pen to make loops and stitched them down near the Dorset Button.
I worked this block between May 23rd and June 20th, 2018.
Thank you: Ms Iwama, Okibaba, Verena, Darling, Sharon B, Mary C, Carnegie & Co and Guinness, Godiva, The Yorkshire Tailor, Svan Sko, NK, and all readers of the blog who left comments and encouragement while I was working.