World Embroidery Day, 30th July, was established five years ago in Sweden and as the word is spreading more and more participate.

Did you take part? Did you get together and stitch with friends? Did you stitch 'publicly' in a park or at the bus stop?

I am a hermit stitcher and spend the day quietly at home trying to fit in small sessions of stitchery in my day of chores.

The embroidery I chose to work on was another stumpwork portrait. Here is a detail: 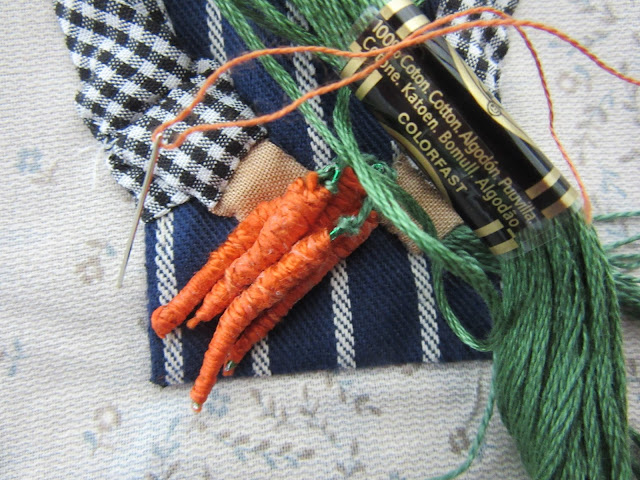 The portrait is a birthday card and I will show the whole portrait once the card has reached its destination, just in case the recipient is reading my blog.
Posted by Queeniepatch at 22:31 16 comments:

The Green Gifts of Friendship

What would the world be without friendship? Don't you agree that it is really uplifting to get a friendly comment on your blog? That meeting with (quilting/blogging) friends 'make your day'? That sharing your time, skill, advice, knowledge, or STASH, with others is a great way to build and foster friendship?

I am so very fortunate to have made friends with Åsa and Julie. Both of them have given me generously of their STASH of green fabric, but also of their time in looking for fabric, of their knowledge, skill and advice in things quilting.

Look what Åsa send me, and notice how she has labeled and documented the individual pieces. 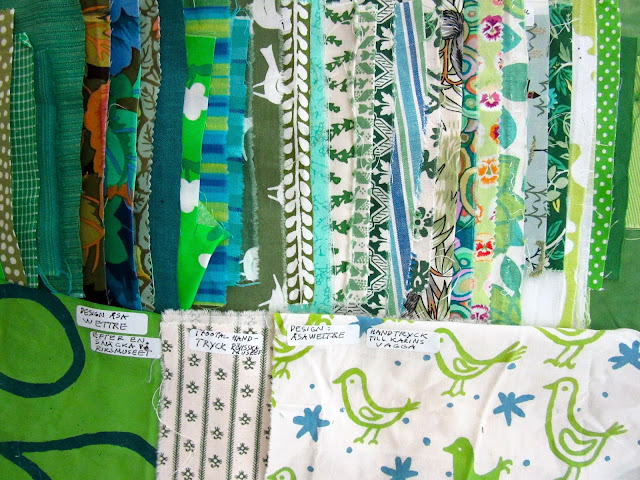 There are samples of her own design, of fabric from the USA and Australia, and from many sources in Sweden.  Note also how large in scale many prints from Sweden are.

Then I went to visit Julie and in her charming home she had pulled out bins and bins of green fabric for me to choose from. 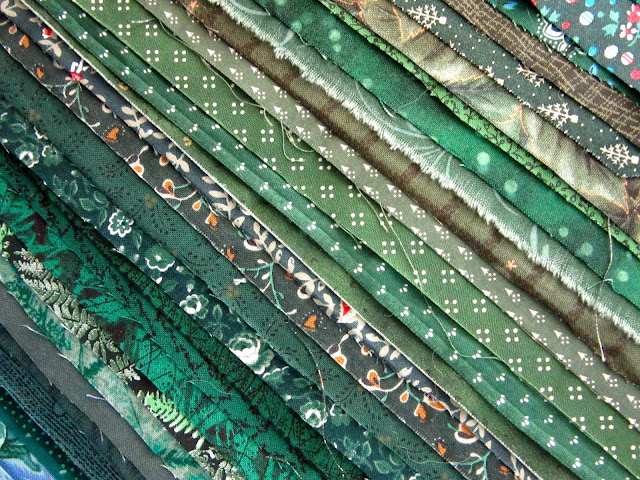 Thanks to Julie's generosity I now have a lot of small scale and green-on-green prints I felt was lacking in my Trinity Green quilt.
I went home with a bag full of fabric, and a heart full of love.

THANK YOU, my kind friends.
Posted by Queeniepatch at 11:16 20 comments:

Are you getting bored with my Work In Progress Wednesday (WIPW) reports? I have only two projects to show on Wednesdays and though the the progress is steady, every time it is kind of a repeat of the previous week's progress, isn't it?

Trinity Green
270 new triangles. I now have a total of 3132 in my collection. 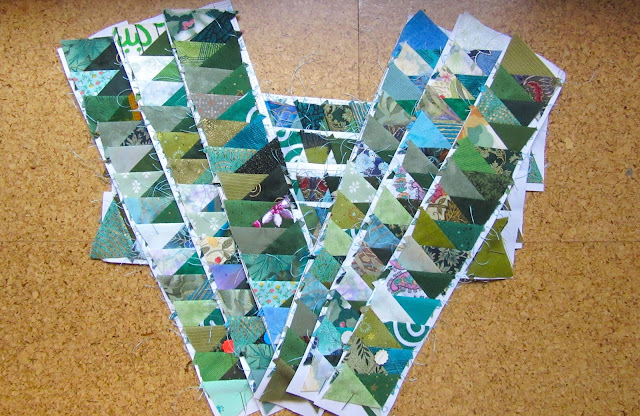 Fabric in Focus
Last week I talked about an old corduroy shirt that was used to make triangles.
The focus today is on another garment, a blouse my mother made me when I was in primary school. She was a skillful dressmaker and made many of my clothes. If I remember correctly I selected the fabric, and she picked out the dressmaking pattern. Then she made an off white pencil skirt to go with the blouse. I still remember how grown up I felt, and how proud I was to have my own dressmaker! 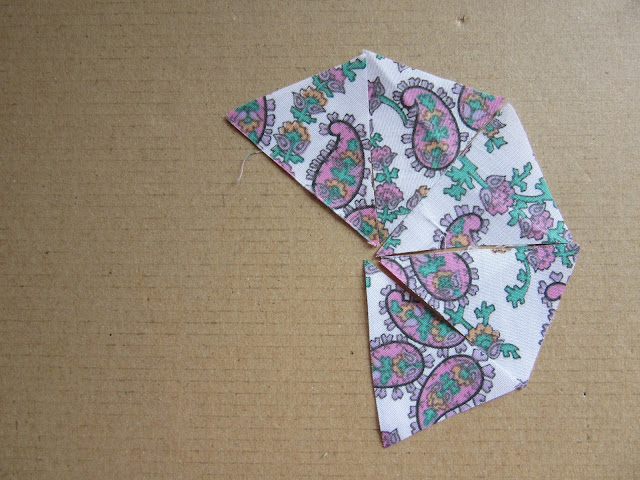 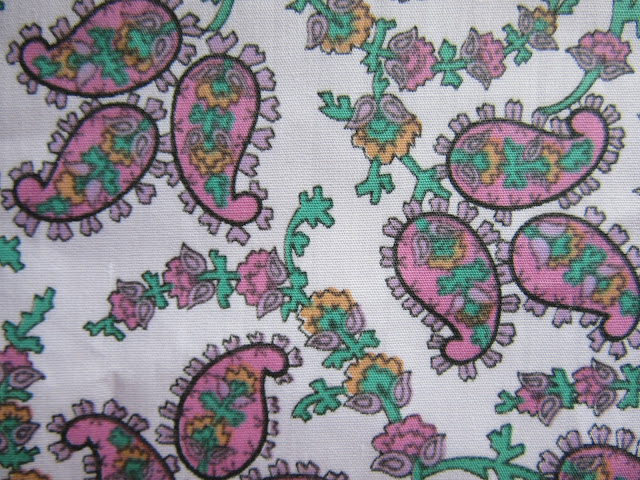 It was a delight to find a bit of the left over fabric in mother's stash, many years later, and I am so happy to add the fabric to this quilt, although I must admit there is only a little bit of green in the print.

HC quilt
I have had the chance to add quite a lot of quilting. While working I have been listening to audio books. 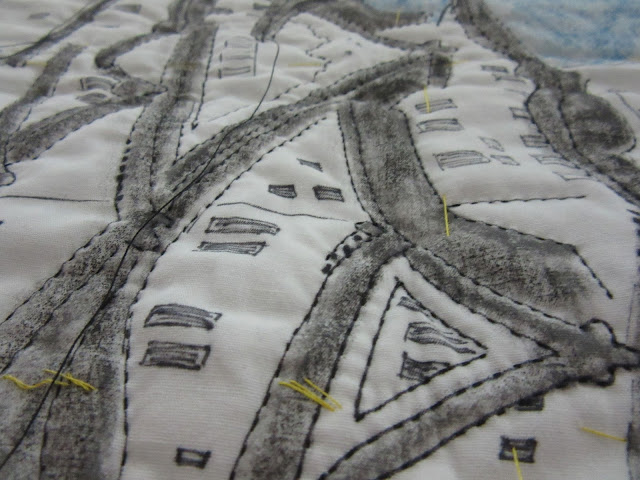 Are you beginning to see what it is?

These Second Helpings of TASTy stitches, would you say they are appetizing? Are they 'cookies and cream', 'chocolate' and 'toasted almonds', or are they 'lard', 'rice gruel' and 'cold oatmeal'? 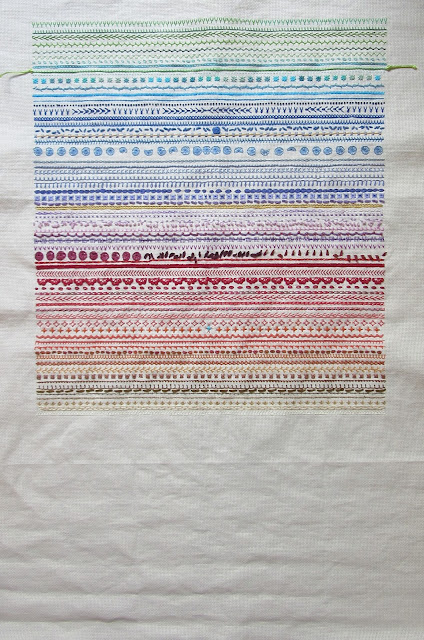 What will be on the menu next week? We're moving into the gray zone... I might skip my meals as I'll be busy with other things than embroidery.
Posted by Queeniepatch at 08:10 5 comments:

This week on Work In Progress Wednesday I can show you some good progress. Although I have as per usual been busy with many things, Monday was a national holiday in Japan - Marine Day (海の日).

A Bank Holiday usually means  fewer chores in our  household and as I had no opportunity to go to the sea side, I spent the day at home with my Elna sewing machine, needle and thread. So my progress is quite good.

Ten paper slips got the 'Elna treatment' and I have 270 new triangles. The total number of green triangles is now 2862. 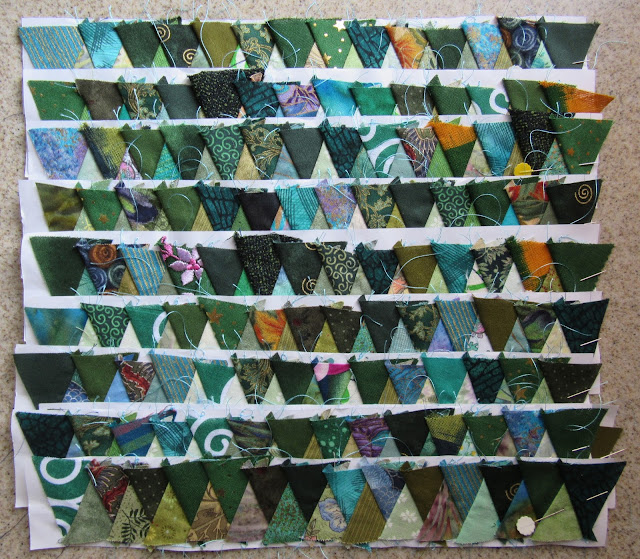 There is an awful lot of orange in this quilt!!!

In the old days patchwork quilts were often made from used clothes. Most garments were made from cotton, linen or wool, and suitable for quilts. Today we wear T-shirts, jeans with stretch and clothes made from synthetic or mixed fibers. It is far more difficult to incorporate our clothes in a quilt unless you make a point of using denim, fleece or nylon.
I had a lovely shirt made of mint green corduroy. It was soft and 'friendly', and worn until the elbows and cuffs lost their nape. Instead of discarding the shirt I salvaged the parts that were still in good condition. The fabric just HAD to be added to Trinity Green, although it is an odd kind of fabric. 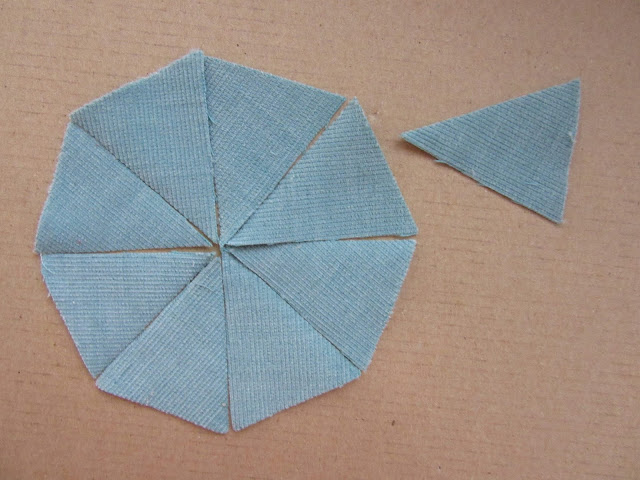 This is what part of the quilt now looks like from the back. 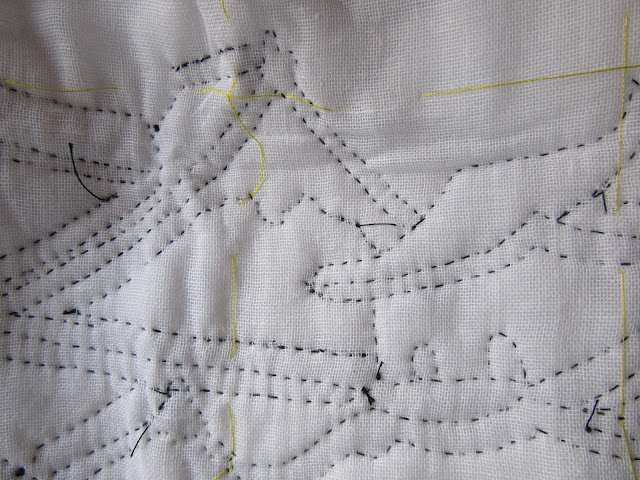 If you had a Marine Day would you go to the beach or stay home and quilt?
Posted by Queeniepatch at 15:30 22 comments:

In spite of the opressive heat I have had a second helping of every stitch served. 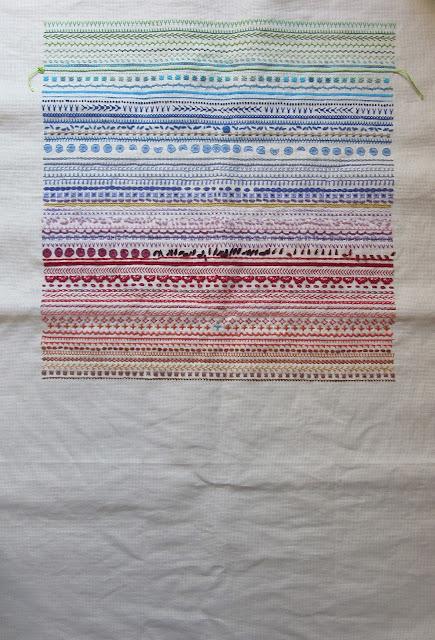 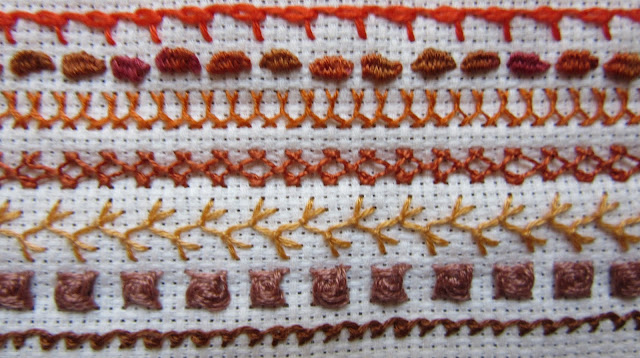 I hope to have the appetite for seven helpings next week, too.
Posted by Queeniepatch at 08:21 8 comments:

In less than a fortnight, 30th July, it is time for World Embroidery Day. 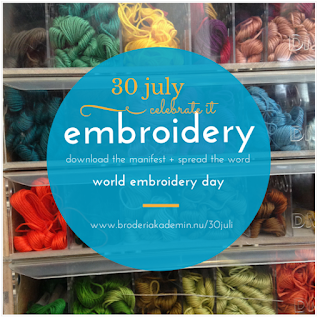 Read all about it here.

This week WIPW really stands for Work In Progress Wednesday!
I have been able to work hard on my 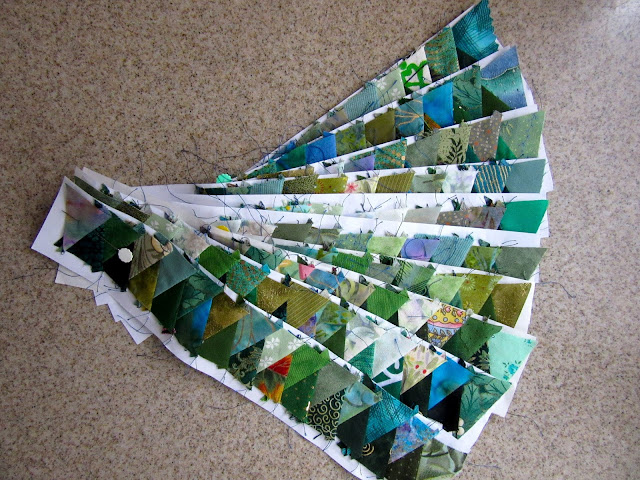 10 more paper strips of 27 triangles each = 270 triangles. Add those to the triangles I already have, and the total number is now 2592.

This week I want to show you, what has become a VERY Japanese pattern. It is supposed to have originated in Egypt, though, and reached Japan via the Silk Route in the 7th century.
It is called 'karakusa moyou' 唐草模様 or Japanese Arabesque. 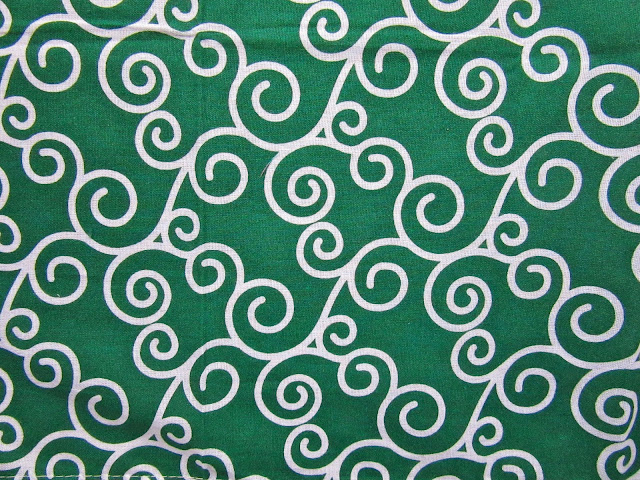 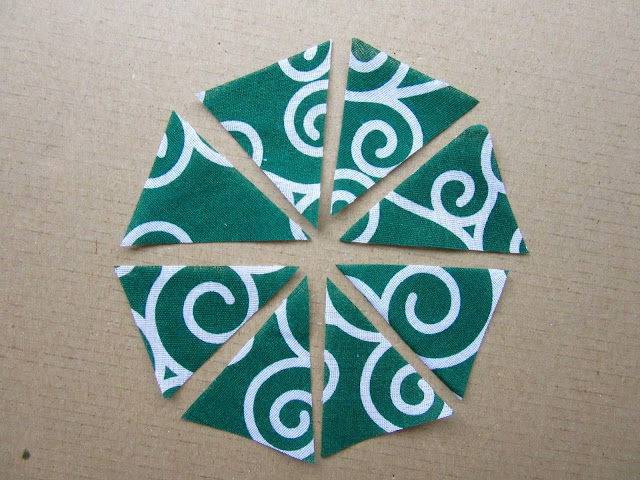 It is a typical pattern for the 'furoshiki', a cloth used to wrap up goods into a bundle, the ultimate eco bag.
In cartoons and comics, the thief is often illustrated sneeking away with the loot in a karakusa wrapping cloth. To make sure I will not be mistaken for a thief I have cut up the furoshiki and used it in Trinity Green, ha, ha!!!

To read more of the background of this pattern I suggest checking out this link. You could skip the text, and just enjoy the illustrations at the end, you'll see the pattern used in the 'shishimai' lion dance, on various china ware and indeed a comic thief, there are even some cute cats... 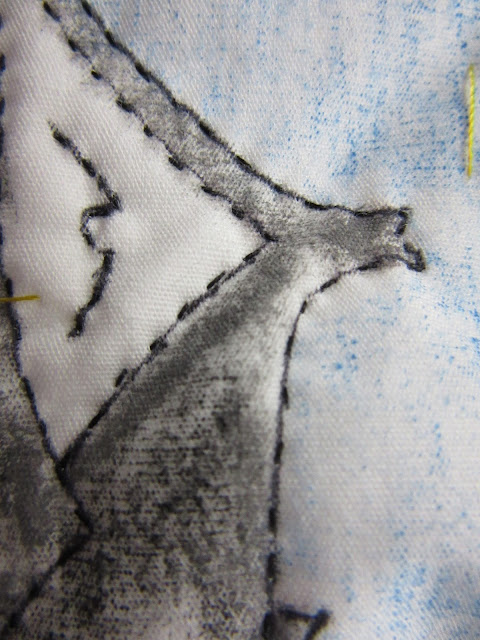 Have you had a productive week?
Posted by Queeniepatch at 16:22 25 comments:

Too hot and too busy to stitch during the day, I have taken to TASTy night snacks and early morning nibbles. 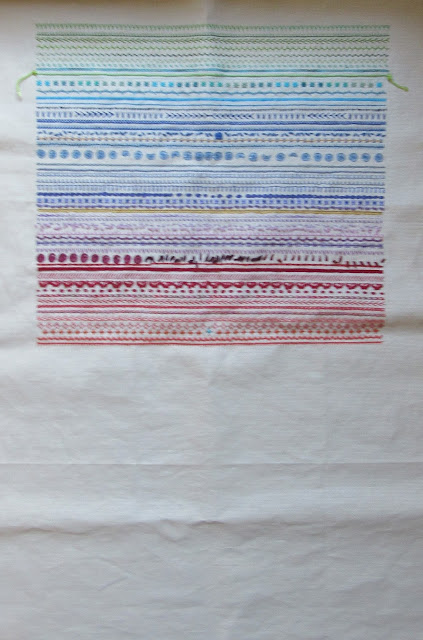 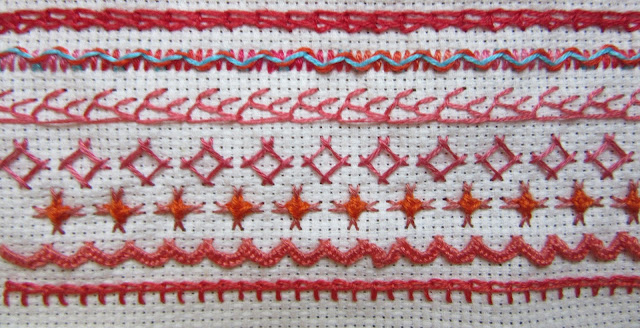 Wishing you a cool and TASTy week!
Posted by Queeniepatch at 09:01 3 comments:

WIPW - No Designer Soft Furnishings for My Dolls

This is the Work In Progress Wednesday report for July 6th 2016.

I xerox copied a lot more paper strips, then stitched on 135 triangles. The total count is now 2322 triangles. 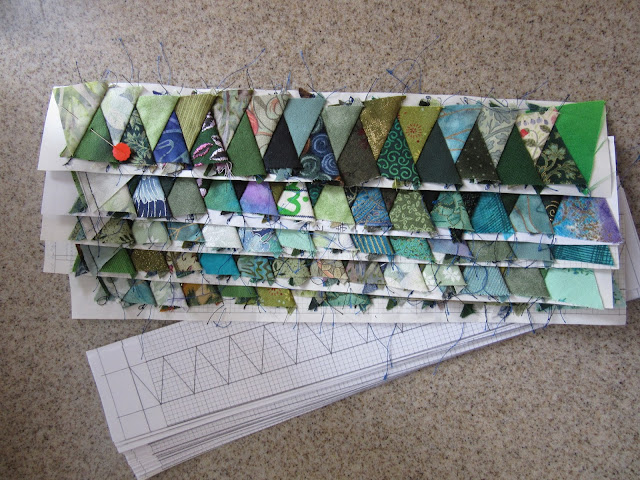 Josef Frank was a famous and much loved architect and designer, who lived most of his life in Sweden. His usually large scale floral prints can be found in many Swedish homes, as wall paper, curtains, upholstery, tote bags .... 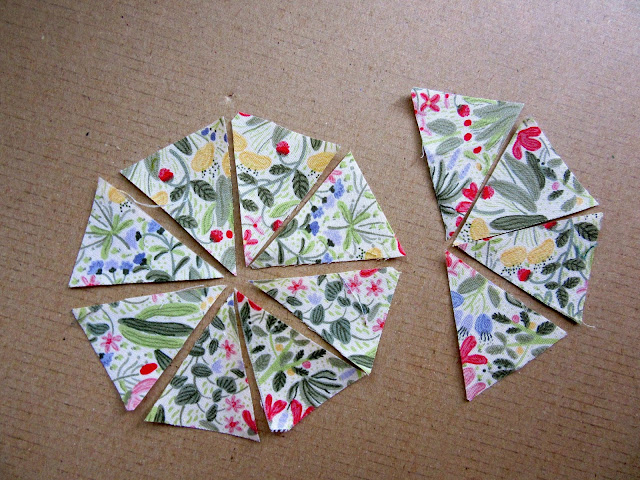 When I found this cotton print in Japan I instantly thought it resembled some of his designs and I could give a Josef Frank touch to my doll house furniture. Alas, I have now cut the fabric into triangles and they will end up in the Trinity Green quilt. Poor dolls, their home will have no designer soft furnishings! 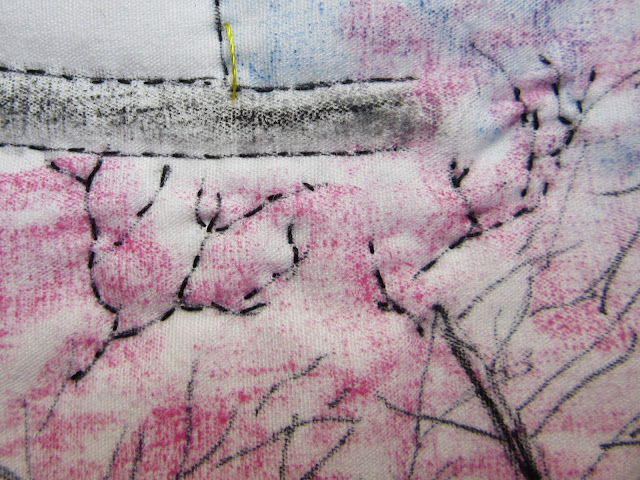 Here the quilting lines will be rough and a lot of the drawn ink lines visible. Some pink embroidery will be added later.
Posted by Queeniepatch at 14:50 20 comments:

I managed to do last week's portion of seven TAST stitches 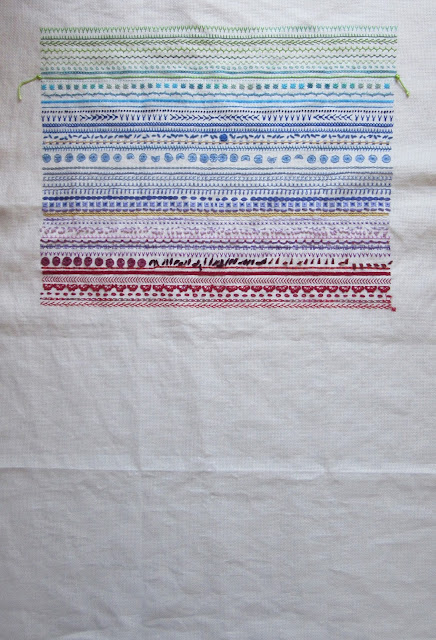 From top:
43)  Magic Chain Stitch
44) Portuguese Border (I had to practise the rhythm, then it went smoothly)
45) Arrow Head Stitch
46) Buttonhole Eyelet Flower Stitch (Aida and stranded floss had better not be used for this stitch)
47) Berry Stitch
48) Knotted Cable Chain Stitch (I had to look up the name and instructions)
49) Knotted Feather Stitch
Posted by Queeniepatch at 08:26 8 comments: