Christmas quilts from my stash - 3

The third quilt I usually display in December is called Sub Rosa.

In 2003 I made it for the Kaleidoscope Hoffman Challenge. The theme was Elizabethan Splendour. 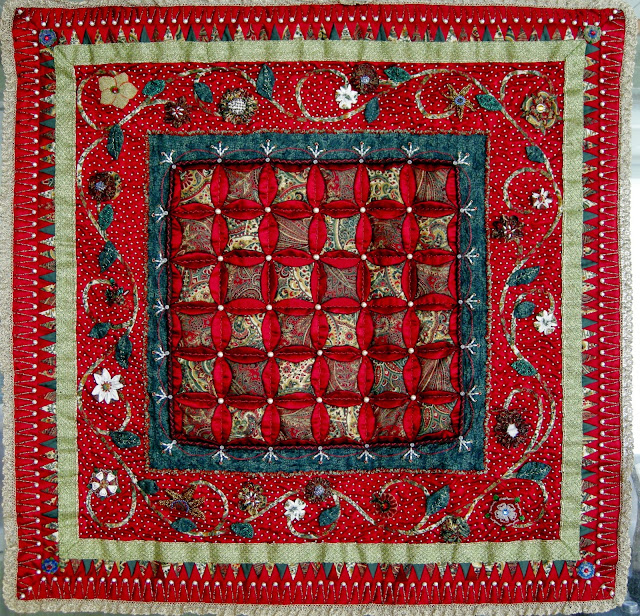 One stipulation was that it should measure 1 m square and contain at least 50% of one or more of the seven challenge prints. At that time I had been given lots of fancy remnants from a seamstress who makes evening frocks and wedding gowns. Here was a good opportunity to use some of that red silk with the Hoffman prints.

This is an extract from my entry:
'The theme is ELIZABETHAN SPLENDOUR...' so I decided to make something that reflects Queen Elizabeth I. A traditional quilt, with an organized pattern but many new ideas, rich and overly decorated but tasteful. To bring out the beautiful patterns in the Hoffman prints I used a heavy red silk as the main contrast and added as much gold, pearls and jewels as I found suitable.
The centre of 'Japanese patchwork' blocks, filled with wadding and decorated with metallic embroidery and pearls, is framed with eight borders. The main of these borders consists of a winding Hoffman bias tape where various flowers have sprouted; they are appliqued, folded, ruched and embroidered. There are several flowers in handmade velvet; I even turned one Hoffman print into a velvet flower! This border is then quilted with tiny pearls on the front and gold beads on the back. There are well over 3000 pearls and beads on the entire quilt and it is edged with a frilled gold lace.

As you can see I was into quilting in unusual ways already ten years ago.
Sub Rosa didn't pick up a prize, but it was featured in 'Fabrications' Oct/Nov 2003. 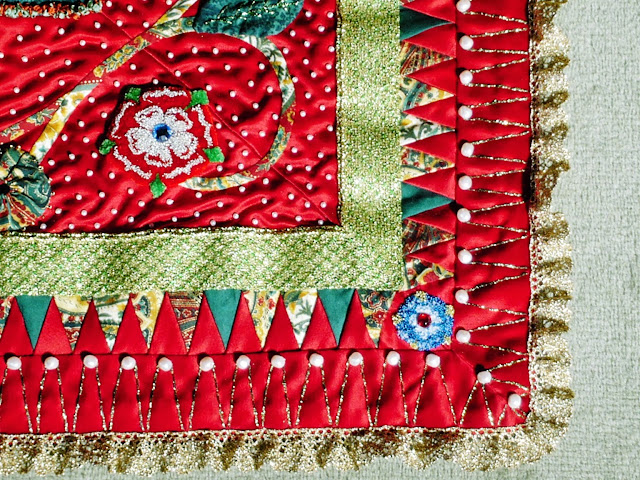