Welcome to Sunday Stitch School. Today I will be focusing on another basic and fundamental stitch, the Cross Stitch. It is also known as Sampler Stitch, Berlin Stitch and Point de Marque, and in Swedish is called Korsstygn. I would be delighted to hear what other names, in other languages, it has.
Updated information:
French: Point de Marque is an old expression, now it is called Point de Croix
Dutch: Kruissteek 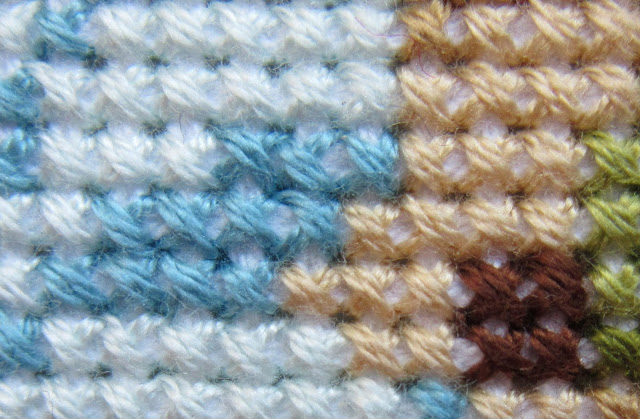 Cross Stitch features in almost every one of my stitch books. In one of them it says that this stitch is used traditionally in India, Central and Eastern Europe, the Greek Islands and Scandinavia, but I think it is a stitch that can be found in ANY country on Earth.
In Britain, in the 19th century, learning the Cross Stitch was an important part of girls' education and the name Sampler Stitch must refer to the many samplers that these girls made.
One unique form of Cross Stitch embroidery is the Italian Assisi work, where the background is stitched, but the motif remains void of stitches.
The name of Berlin Stitch, does it refer to the printed and coloured grid patterns sold in Germany from 1809?
Greece is a country of islands and there are many styles of Cross Stitch unique to the various islands, like the elaborate bed tents which were made on Cos and Rhodes.
In India, is Cross Stitch most commonly stitched on plain weave fabric, for clothing, where there is no help from large holes (like in the Aida fabric)? Chitra and Shami, is this a correct assumption?
For more reading, check Classic Cross Stitch.

As for Scandinavia, I bet there is some form of Cross Stitch embroidery in every home in Sweden.
For example the embroidered banners, so popular in the 1930s or 40s with a slogan or motto 'Home Sweet Home' or 'The Early Bird Catches the Worm' have now become a place for 'stitch graffiti' or political slogans by young and avant-garde stitchers and might include the Peace Mark or sculls. 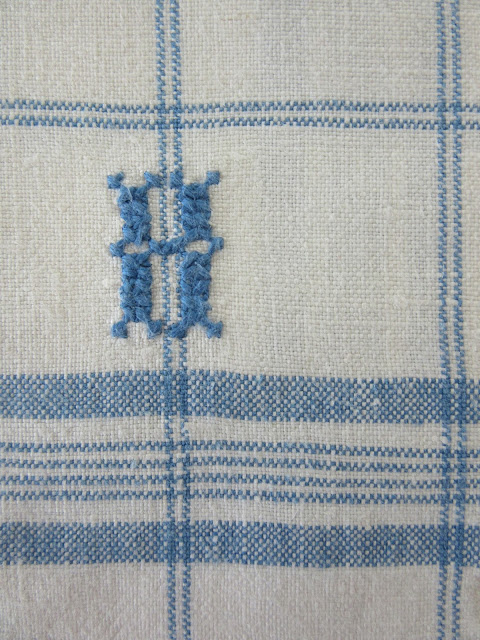 I worked this kit (Clara Weaver?) 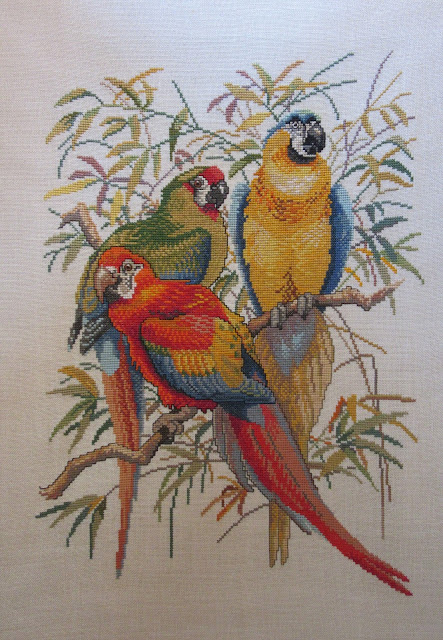 for my mother's birthday when I was still a student.

I also have this aunt who is a stitch oracle and whose strands of thread lie flat in each stitch, although I am sure she has never seen a laying tool in her life. She got plenty of practise as she made hundreds of Christmas cards for charity. Even her father took up Cross Stitching after he moved to the Old People's Home, and stitched well into his late 90s. 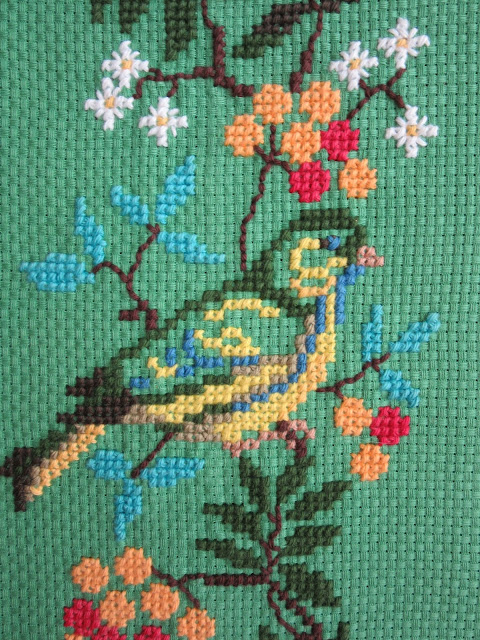 I guess he was about 95 years old when he made this.

On Aida the Cross Stitch is easily worked like this:


For an individual stitch 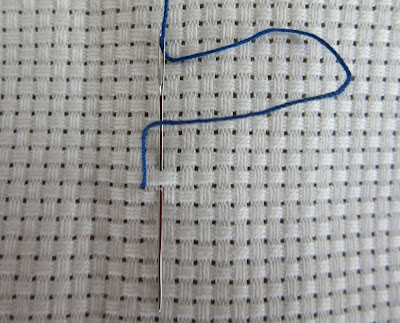 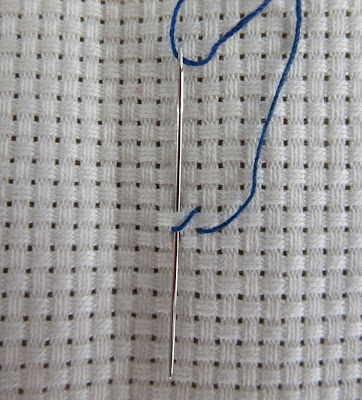 For a horizontal row 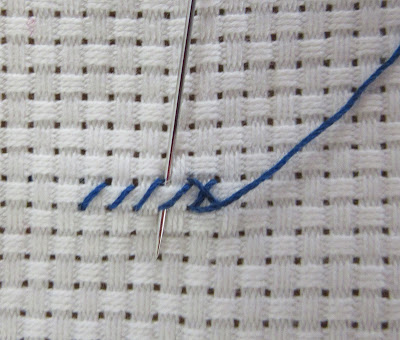 For a vertical column 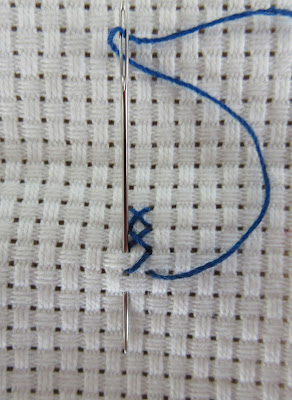 According to Sarah at Sarah's Hand Embroidery Tutorials (a great source of stitch instructions) working the stitches horizontally is called Danish style. This is the way I learned it in school (Denmark is near Sweden so an obvious connection?) Maybe sticking to the Danish style only, is why I am not good at skipping from one area to another without making a mess on the back.

My homework will be to:
1) Practise on this free pattern (found in a pack of magnetic window markers), and aim for 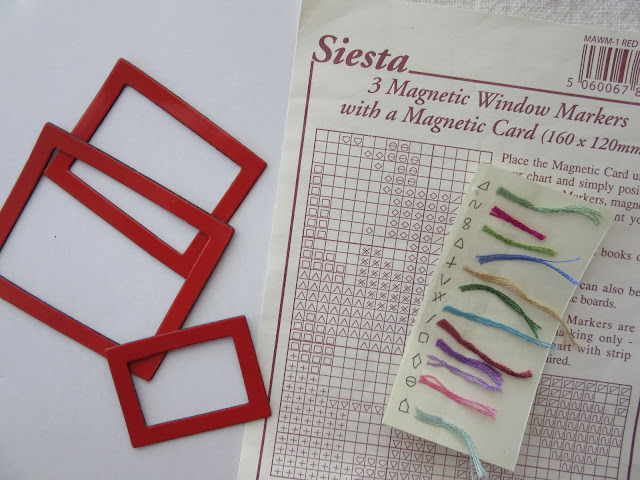 flat strands on front and a neat back. 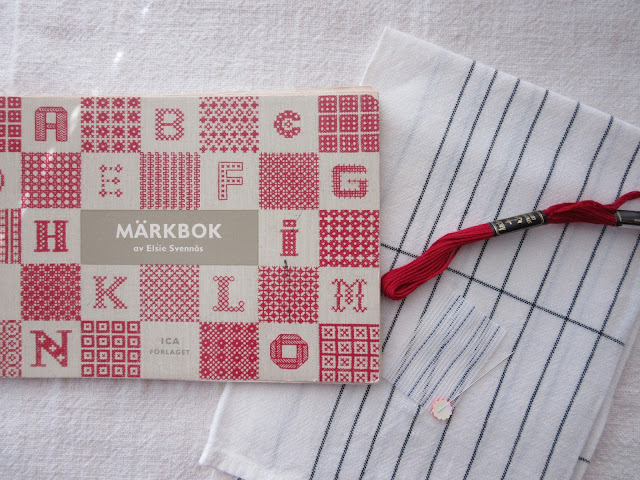 This has been a long and chatty lesson. I hope you haven't fallen asleep!